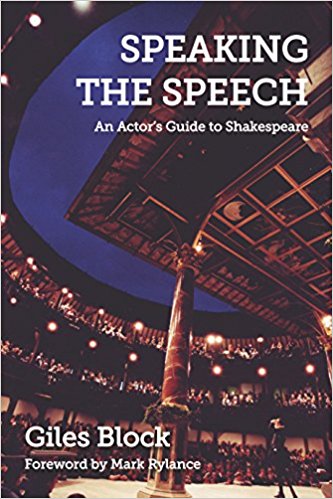 An Actor’s Guide to Shakespeare

by Giles Block, actor, director, and “Master of the Words” at Shakespeare’s Globe Theatre in London

Foreword by the actor Mark Rylance, first artistic director of the Globe and 3-time Tony winner

While I have taken many classes and worked with Shakespeare quite a bit before this book, I was struck at how well organized it was, particularly for complete beginners. I feel Block does exceptionally well at starting very slowly, and gradually building more and more complex thoughts and ideas. I had a number of discoveries throughout the text, too. My notes for the book are over 18k words!

Below are a handful of my notes: first, what I felt are some of the “biggest” ideas, and then, a bit more of what I feel is important or necessary to remember. I’ve sectioned items off with the same chapter headings Block uses.

[Nathan: written on the page, verse may look like poetry, in that the words are not written across the page from margin to margin; this is deliberately done, as will be explained.]

Shakespeare’s blank verse is “the sound of sincerity.”

Verse is based on two things:

[HAMLET, speaking in verse to Gertrude, when she requests him to stop mourning for his dead father:

Seems, madam? Nay, it is, I know not “seems.”
’Tis not alone my inky cloak, good mother,
Nor customary suits of solemn black,
Nor windy suspiration of forc’d breath,
No, nor the fruitful river in the eye,
Nor the dejected havior of the visage,
Together with all forms, moods, shapes of grief,
That can denote me truly. These indeed seem,
For they are actions that a man might play,
But I have that within which passes show,
These but the trappings and the suits of woe.]

For multi-line thought units: top-up your breath before the new line – gives each line its own weight, yet keeps the thought moving.

The part of the line that generally has the most prominence is at the end of it.

The “ragged” appearance of lines, the absence of punctuation at the end of them, is capturing the sound of emotional disturbance.

Highways and Pop-ups [“Side Roads” for us Yanks!]

The highway is the main thrust of the tale and the pop ups (or byways) are little detours to fill in some background information, or to throw in a little witticism.

Forms of Address, Verse Irregularities—and What They Tell Us

The way Shakespeare uses “you” and “thou”

Mirroring is the sound of disagreement – rather than create a shared line, the second character takes his own line; they are not breathing as one with a shared line.

[Nathan: when written, prose is written across the page, from margin to margin, and looks more like “modern playwriting.]

Prose is much more consciously shaped than casual speech, and it doesn’t capture the sound of heartfelt spontaneous utterances as verse does.

Prose is a language which says one thing to hide another.

Become aware of and seek out these junctures of prose/verse.

[HAMLET, speaking in prose with GUILDENSTERN and ROSENCRANTZ—his old friends, but perhaps Hamlet doesn’t trust them here, when in fact, these two have been sent with orders from the king and queen.

ROS.
My most dear lord!

HAM.
My excellent good friends! How dost thou, Guildenstern? Ah, Rosencrantz! Good lads, how do you both? ]

It can be the language of lovers, of magical spells, of encapsulated wisdom, of discoveries—or it can be a quick way to outsmart others.

Unbidden (not desired) rhymes are the sound of receiving an answer.

Concluding rhymes (in a speech/scene): give us a feeling that either something has been successfully tied up, or that the characters have agreed to bring some, as yet unfinished, business to a temporary halt—for now, nothing more needs to be said.

Rhyming tends to freeze the action, holding the moment in suspension; planning requires the onward surge of blank verse.

When someone uses anapests (two short or unstressed syllables followed by one long or stressed syllable), they are being cheeky and having a laugh, kidding around, possibly at someone else’s expense.

Rhymes that bring ambivalence, possibly a trap into which we could be misled, fooled, or even destroyed.

Leaves the characters unsure whether they rhymes they hear are truly insights or deceptions.

Takes only a second to say a monosyllabic word, and that’s the same with any moment of discovery—the moment between knowing and not knowing is incalculably small.

These rhymes act like a light bulb being switched on—the rhyme chimes at the exact moment of discovery, which is when the second word is sounded.

As the rhyme sounds out, the discovery is made.

To maintain the energy of the play, as one scene ends and the last line sounds, the first line of the next scene receives its cue.

Actors should welcome rhymes, but characters need to treat them with caution.

Blank verse: the sound of sincerity—the emotional expression of thought; it carries the emotion of the speaker along with the sentiments that are being expressed.

Prose: a cerebral activity, the language of invention—saying one thing to hide another; haphazard rhythms parallel the quick firings of our brains, when head rules and masks the heart.

Rhyming verse is special: it’s the sound of magic; of being filled with unrequited feelings; it can tell us things we never thought we knew; it can fool us with false promises; and we can, if we wish, use it to outsmart others; it holds the lines in an embrace; the rhyming words seem to be alive as they vibrate with each other.

[Nathan: Rhyming verse is used the least in Shakespeare’s plays, yet there is so much to unpack!]

The Folio punctuates as much, or more, with the speaker in mind than with the reader.

Re-punctuation may well direct us away from the line as Shakespeare heard it.

A comma after a word can be to help it stand out—to direct us to understand that the word is emotionally important; without the comma, we might miss the importance of the word completely.

Semi-colon can often be used to mark a point of emphasis within a thought.

The Folio uses question marks to punctuate both exclamations (not to be answered) and genuine questions.

Abbreviations or elisions of words: this should not affect the way we say these words—if we say them easily, colloquially, those extra syllables will simple not be heard.

The raggedness (no punctuation at end of lines), the packed commas, the shortness of phrases are a brilliant example of how agitation can be written into the text via the punctuation and line endings.

Deepening and Reviewing Our Work

Learning how the thoughts are expressed and phrased, by topping up the breath before the new line, will both enable you to achieve clarity and also help you to be at one with the emotions that lie behind the words that Shakespeare heard his characters saying: because we reveal our emotions in part by where and how we breathe.

Imagine a wave crashing onto the shore: the crest is the last stress of the old line, and when the wave actually hits the shore is the first stress of the new line—but there is a moment we wait before in between, while the water is still in motion.

Breaking everything down, repeating it a few times: you see how ordinary and possibly modern things are; remember: Shakespeare’s vocabulary was simple.

Thoughts broken up by breaths (expressed in two parts) are spoken with more emotional care; an unbroken thought tends to sound confident.

We need to remember that for the characters themselves, they probably wish they were not so emotional—emotion just gets in the way of what they want to solve and sort out—and so in our playing of them, we should do what we all do in life, which is try to minimize the effect of these emotional interruptions, and to replicate this, we should not breathe too leisurely.

Your desire is to get to the end of your thoughts as soon as possible, giving yourself no more time than is necessary for the breaths.

Shakespeare is always intent on capturing what he hears his characters say; and for him to make them speak more coherently would be false to the situations in which they find themselves.

Occasional emails whenever I have something to say about travel, theatre, health, audiobooks, or... something else. No spam. Unsubscribe easily at any time.